I am married for almost 13 years, mother of two kids. I wear the clothes of my choice both Indian and western. I have many male friends and male colleagues. I go out for Coffee and Drinks. I am expressive and I laugh while talking to the people around including males. Though it is normal for me, but for many people around; my “normal behavior” makes me a woman of questionable character! And so I am tagged as a woman who is said to be continuously into ‘multiple  relationships’ because of my ‘Normally being myself’!

Just because I can eat my lunch with a bunch of male colleague at times, and  can indulge in some ice-cream or coffee once in a while with someone, this unacceptable behavior of mine, is pointed out in the society by some of of the famously known liberal collogues. Even in the so called hep media house culture; it was an offense to be friends with Men! Some people are just so obsessed with bitching , that they can go to any extent to prove their point during character assassination. I advise,  Get a life of your own and stop discussing mine!

I am not surprised or shocked to see how society behaves and reacts in the movie #Pink! We the people, make the society, and our mind set is actually sick. When I worked with TV news channel and would come late by office cab full of other staff including male, People would stare at me from the windows and dark corners of their balcony. I was raided in my house by a group of Aunties, who doubted if I am actually married to the man I am living with! Just because I don’t wear a mangal-sutra or sindoor or always decked up like a newly married girl (in 2004) , they would doubt us.

When I started working with an institute into media education, HR told me many times not to wear skirts and sleeveless tops as I should look like a teacher! So put on crisp cotton(which I love to wear, but not when someone imposes it on me)  and a Big bindi to llok like a teacher?  One of the seniors (Deputy Director of that reputed Institution) once told me, I was married and from a good background ( he meant upper cast and Rich) so I shouldn’t wear the clothes like ‘that kind of girls’ ; pointing on the two reception executives. And the clothes he was objecting on were jeans and shirt!!!  Yes! This is the kind of society we are living in.. and #Pink does show them their real face.

Now for the people who write reviews and praises for #Pink; I just want to request you guys.. Stop this double standards yaar. You praise the film on social media but in reality for the females around; you have same approach. And this hypocrisy is not restricted to the men… most females belong to same category of hypocrisy. On one hand you talk ill about the women who are independent and modern and on the other hand you write long posts praising films.. why stop at two when you can have multiple standards!?

#Pink is the mirror of society. Society is judgmental. I get upset on these double standards at times, Earlier, I use to fight and confront such people in past. Now I have learned to take it easy. I don’t waste my energy on making people understand what is questionable for them ; is actually my normal lifestyle. I can’t make whole world happy.  I am happy to have that questionable character.. I don’t fake! Life is too short to be someone else! 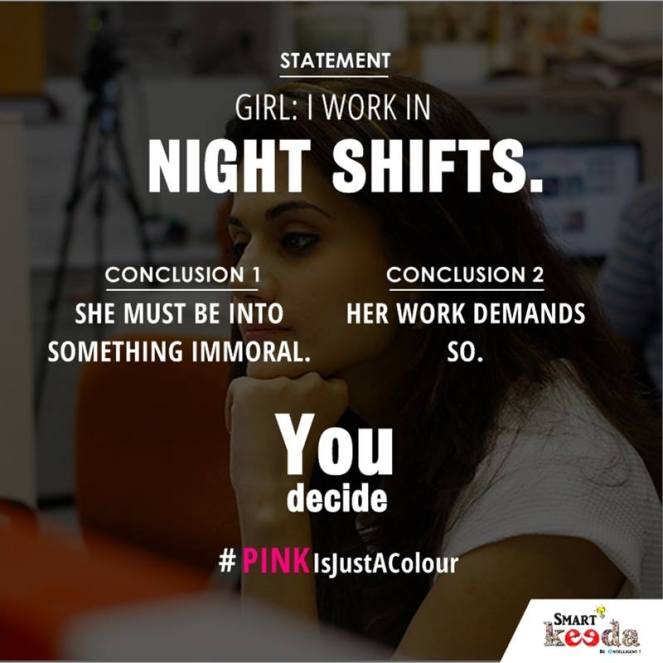 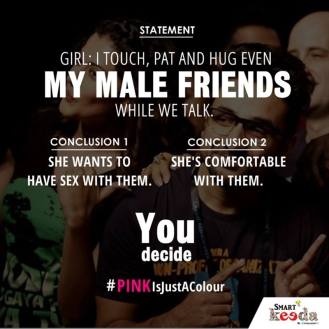 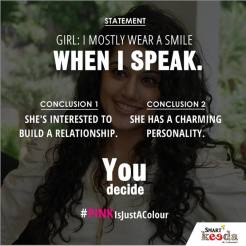 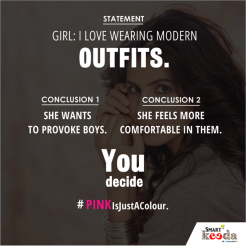